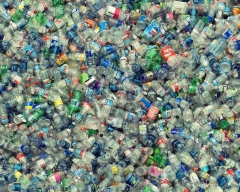 Each year 8 million tonnes end up in the oceans and the trillions of tiny plastic pieces do not break down but instead, when not drifting, are ingested and remain in the food chain. Various solutions have been proposed but recently a more effective one employing a bacterium species Ideonella sakaiensis demonstrates nature’s approach. PET (or polyethylene terephthalate) is eaten by bacterium that has appeared to have evolved the ability using just two enzymes. This is remarkable in itself since plastic has only existed for 70 odd years.
Japanese researchers analysed microbes living in plastic dumps and wastewater debris and discovered the bacterium.
With further development, the team hopes the bacterial approach may provide a solution to a dire problem where in 2013 alone, 56 million tonnes of PET was produced but only 2.2 million recycled.
The science is positive because the bacterium breaks down the plastic into potentially recyclable substances from which PET is made – terephthalic acid and ethylene glycol.

While still in the experimental phase further developments would include genetic engineering to speed up the process. Uwe Bornscheuer of Greifswald University in Germany has proposed genetic engineering of the two enzymes into Escherichia coli, a fast growing bacterium.
Bornscheuer is encouraged by the PET eating bacterium discovery and believes in the possibility of discovering other similar microbes. The Japanese group have demonstrated the success in isolating bacterium and may lead the way to further discoveries.

satirist View all posts by ravishank